Places to go in Tokyo

Tokyo has different wards with different attractions. So, as a traveler, where do you go? Here’s the list of areas in Tokyo that I’ve visited and the things that you can roughly find there:

Asakusa gives you a glimpse of old Japan. It’s got older buildings and religious sites, a popular tourist destination. It’s famous for the Sensoji temple, the oldest temple in Tokyo and Nakamise Dori, the shopping street that leads you to it. Go here to see people praying at the temple and shop for souvenirs on the way back to the train station. Despite the number of people going in and out of this place, it’s nowhere as busy and chaotic like the more modern areas in the city, as it’s frequented by the older generations, so it’s a very slow-paced area in Tokyo. Well, unless they’re hosting festivals there.

Recommended for: Those who would like to see more of culture and shop for souvenirs.

Read my posts on Asakusa.

Akihabara is otaku wonderland. It’s famed for being the electric town of Tokyo, where you can find all sorts of gadgets, electronics (appliances, audio/visuals, even beauty stuff), toys, figurines, costumes, comics, videos at one place — it’s like Tokyo’s very own Neverland! Here you can play games at the many arcades or shop for electronic gadgets and souvenirs. You’ll see a lot of youngsters (mostly male) enthusiastically looking for the latest of whatever it is they’re obsessed about there.

Recommended for: Otaku and generally Generation Y and Z.

Read my posts on Akihabara.

Ginza is the entertainment and luxury shopping district of the Tokyo, known for its numerous flagship and department stores. Beside the roads are rows of well-designed stores and remarkable window displays, the kind that would make you stop and stare. It puts shopping districts in other major cities to shame! Prominent department stores include Mitsukoshi and Matsuya which stock middle (think Theory) to high end designer goods (think Chanel). As for the flagship store, almost every other prominent fashion house is present at Ginza.

Recommended for: High end shoppers. Or those who like to look at things they can’t afford. Like me.

Read my posts on Ginza. 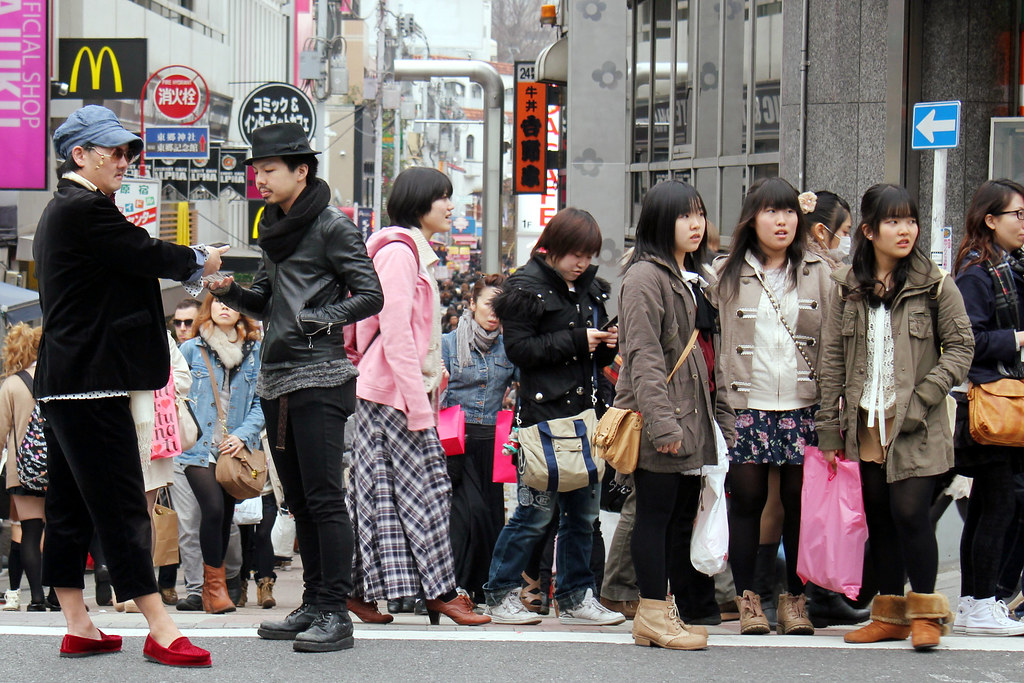 Harajuku is a shopping district in Tokyo that’s also referred as the center of Japanese teenage street style and culture, highly popular among the Japanese youth. You don’t go to Tokyo and not go to Harajuku! Even if it’s not you style, it’s worth a visit. Take a stroll along Takeshita-dori and experience the area that inspired Gwen Stefani. They say the Japanese teens dress up when they come here on Sundays (though I haven’t seen it yet), but just so you know, the human traffic here can get pretty bad on weekends.

Recommended for: The young and those who love the Japanese street style.

Read my posts on Harajuku.

Roppongi is the more international area in Tokyo for its influx of foreigners. It’s also Tokyo’s hub for high fashion (fashion weeks happen here!), gourmet, arts and nightlife. Here’s also where you can visit the famous Roppongi Hills and get a great view of Tokyo from the Mori Tower Observatory. Famous for its nightlife but also one of the more shady known areas in Tokyo. So be cautious!

Read my posts on Roppongi.

Shibuya is like our very own Bukit Bintang. Only its 25x more bustling with brighter neon lights and ever-changing. I’ve visited this place every year for the last 5 years and there’s always something different. Here’s where the famous Shibuya crossing, the busiest crossing in the world and Hachiko is located. It’s where the scenes in Tokyo Drift and Resident Evil were shot! Go here to dine and shop and experience walking along the bright lit sloped streets of Tokyo’s most lively district. Just a warning though, the crowd can be too much for one to handle.

Recommended for: The city lovers and those young at heart.

Read my posts on Shibuya.

I love Ueno! It’s very laid back, yet it has a lot of attractions. One side of it hosts the lush Ueno Park and plenty of very good museums to visit like Tokyo National Museum, Tokyo Metropolitan Art Museum and Museum of Nature and Science and attractions like the Ueno Zoo; while the other has Ameyokocho, a huge market selling fresh produce. I also enjoy walking along the neighborhoods at Ueno because the houses are so nice 😀

Recommended for those who want to chill and are not in a rush. Baby boomers might love this place, while kids will have fun running around inside the park.

Read my posts on Ueno.

That’s all for now. This post will be updated when I have more ideas 😀

This blog has recorded my experiences, stupid anecdotes, travels and hunt for luxury at a bargain.

I have less mental space to blog now so I'm still figuring out what to do with this.